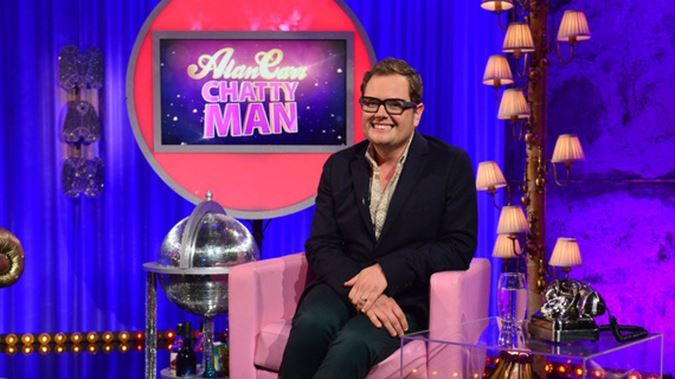 Fresh of his tour of the UK and Ireland, Alan Carr is bringing is Yap, Yap, Yap tour to New Zealand and it promises to be a cracker. The tour will visit Auckland, Wellington and Christchurch with sell-out crowds expected in all three venues. On Saturday 13 August, Alan will bring his new show to The Opera House in Wellington and it’s not too late to get your tickets so don’t miss out!

For many people in New Zealand, we will be most familiar with Alan Carr from his television series Alan Carr: Chatty Man which debuted in 2009 and has recently been booked to carry on through to the end of 2016 at least. The show has won countless awards and see Alan interview some of the world’s biggest stars in his own unique style including Lady Gaga, the late great Robin Williams, Taylor Swift, One Direction, Justin Bieber and more.

Alan Carr’s first breakthrough came in 2001 when he was awarded the BBC New Comedy Award for Stand Up as well as City Life Best Newcomer and this really set him on the road to becoming one of the hottest comedy stars in the UK.

On top of his comedy work, Alan has also co-presented the annual charity show, Comic Relief on the BBC in 2008. He has been a big supporter of Comic Relief since and regularly takes part in various related activities.

As well as performing stand up shows all around the world, Alan has also performed for Royalty at the annual Variety Performance where he performed for Her Majesty The Queen.

What the people say

As you can imagine, Alan Carr’s shows are widely acclaimed. Here are just a few snippets about the star performer:

“A comedian who owns the space he is working in so much, he could put a flag up.” – The Independent

Tickets are still available for the show in Wellington so make sure you book today. Although Alan’s shows are classed as suitable for all audiences, there can be some adult themes and occasional coarse language in his shows so please consider this if you are thinking of taking any children along.

Tickets can be purchased from Ticketek.

If you are planning on heading to Wellington to watch Alan on the 13th August, why not make a weekend of it and book your city centre accommodation. Situated a short walk from the Opera House, the Willis Wellington Hotel is the perfect place to stay when you next visit the capital. Within close proximity to some great bars and restaurants, the Willis Wellington is the ideal place to stay and we have some great winter warmer deals on at the moment.