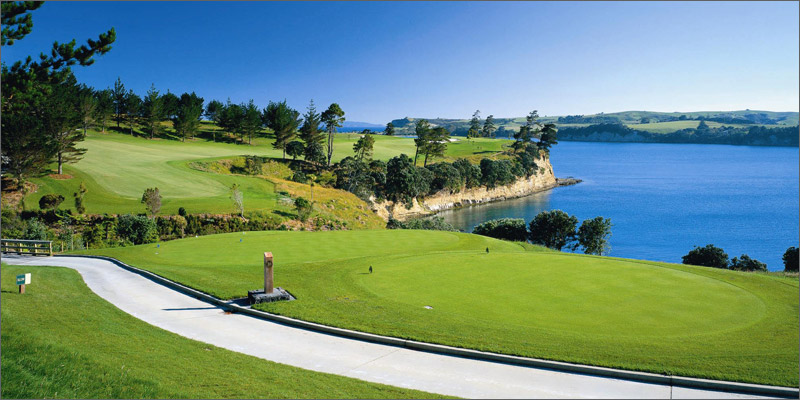 New Zealand is one of the best places in the world to play golf. With the second highest number of golf courses per capita in the world behind only Scotland, there is no shortage of options when it comes to playing golf, especially in Auckland. If you are staying at one of our two Auckland hotels, there are a number of options when it comes to golf in Auckland from parkland to links courses so we thought we would give you a rundown of our top five golf courses in Auckland.

The jewel in Auckland’s golfing crown is Titirangi golf course. It is, and will remain the only course in New Zealand designed by world-renowned British course designer, Alister McKenzie. This guy crafted some of the world’s finest courses including the home of the Masters, Augusta National, Cypress Point and Royal Melbourne in Australia. This definitely puts Titirangi into New Zealand’s elite golf courses and a great challenge for golfers of every level.

Dr Alister McKenzie believed that golf should be for everyone, “A really great course must be a constant source of pleasure to the greatest possible number of players.” Titirangi was definitely designed with all golfers in mind and offers an escape from the hustle and bustle of the city. If you are picking only one course to play, Titirangi is right up there.

Often regarded as Auckland’s best central course, Remuera is situated in a beautiful woodland setting and has a reputation as one of the friendliest and warm golf clubs in Auckland. Just a short 15 minute drive from downtown Auckland, Remuera has a proud history which has seen them host the New Zealand Open. As well as offering a stunning golf course, Remuera also has amazing facilities for all golfers including a full length driving range which has recently been fitted with 15 new covered bays which also offer golfers the chance to video their swing from the back and side.

Remuera is consistently changing and updating the course, making improvements to the tees, greens and fairways to elevate the course to the next level. It’s a great challenge for all golfers and this year the course will play host to the finals of the World Masters Games Golf Tournament.

If you are looking for a course with a view, then look no further than Gulf Harbour Country Club. Situated just a short 45 minute drive from downtown Auckland, Gulf Harbour is arguably one of New Zealand’s most accessible, genuine championship courses. With four different tees, this is a great challenge for all golfers from the pros to the beginner. The course was designed by world renowned American designer Robert Trent Jones Jr and his stamp undoubtedly helped the club to secure the 1998 World Cup of Golf – without a doubt the biggest golf event to be held on New Zealand’s shores.

The front nine is very scenic as it winds itself around the purpose built houses that surround the course finishing with three holes around a lake. It’s not until the course hits the 12th however until we see Gulf Harbour come into its own with stunning views back across the water towards the city. The signature hole is the par 4 16th (pictured) and the views will have you reaching for your camera as you look across to Shakespear Regional Park and Tiritiri Matangi.

Another of Auckland’s premier championship golf courses, Muriwai Golf Links offers something completely different to the other course in our top five. Muriwai is a proper links course built in the same style as Scotland’s famous courses and offers up a tough challenge, rewarding you with some stunning holes and some great views. The course is accessible all year round which makes it an attractive option if you are visiting in the winter months or you fancy a game when it is wet everywhere else.

Muriwai is another course which will host one of the early rounds for competitors in the World Masters Games and that will offer up a great test to golfers from around the world. If you want a change of scenery from the usual parkland golf, Muriwai is one of the best examples of a links course in New Zealand.

The final course in our top five golf courses in Auckland is Akarana. Situated just 15 minutes from Queen Street, Akarana is a super-friendly club which has stood the test of time since it was built in 1927. The course features two distinct nines; the shorter inner loop has a par of 34 and features one of Auckland’s most renowned holes; the par 3 8th which plays 176 metres of the blue tees and features water to the right of the green. The outer nine is a tough challenge with out of bounds on the left of six of the holes and also features two long and challenging par 5s.

Akarana is another club that will host one of the rounds at the World Master Games. With its central location, Akarana is a great option for those wanting to squeeze a game into a tight schedule on a visit to Auckland.

So there you have it, that’s our top five golf courses in Auckland but there are many other great courses that missed out on the list including the newly built Windross Farm course which will host the 2017 New Zealand Women’s Open featuring world number one Lydia Ko and the Royal Auckland Golf Club which is a private members club making it very difficult to get on for a game.